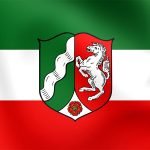 North Rhine-Westphalia is the investment location of choice for small and large companies operating internationally.

This means that NRW has a particularly strong local economy with many jobs.

Find out below why it is also financially interesting for private individuals to invest in North Rhine-Westphalia.

More specifically, investing in residential property to let offers unique opportunities, especially if you are also looking for the highest capital gains potential.

At the bottom of this page you will also find an overview of German investment properties for sale with passive care formula and guarantees.

North Rhine-Westphalia (NRW) is located in the centre of Europe and borders the Netherlands and Belgium.

It is the most populous and also the most densely populated of Germany’s 16 states.

With 526 inhabitants per square kilometre, the state is more densely populated than Japan or the Netherlands.

The largest cities are Cologne, Düsseldorf, Dortmund, Essen and Duisburg.

More than 160 million people live within a radius of 500 kilometres of Düsseldorf, the state capital.

This represents almost a third of all EU consumers.

From no other place in Europe can so many people with such great purchasing power be reached within such short distances as from NRW.

The state pools as much as 21.5 per cent of Germany’s purchasing power.

The inhabitants of NRW alone spend €372 billion on private consumption every year.

Facts and figures about NRW

The economy in North Rhine-Westphalia is flourishing and growing rapidly

The economy in North Rhine-Westphalia is booming. According to numerous economic indicators, this German state is one of the world’s economic leaders.

Every year, NRW generates a Gross Domestic Product (GDP) of more than EUR 700 billion, which corresponds to more than 20 per cent of the GDP of Germany as a whole.

As a result, NRW clearly outstrips all the other Länder in Germany.

The state is also making an impression at the international level: NRW alone generates 4.4 percent of European GDP (EU-28) and is thus one of the most important economic regions in Europe.

In the international rankings, the state is even higher in terms of annual GDP than European countries such as Sweden, Poland and Belgium.

North Rhine-Westphalia is Germany’s industrial engine and is definitely the driving force behind the German economy as a whole.

Industrial companies in North Rhine-Westphalia generated around EUR 352 billion in 2019.

Just under 20 of the 50 most profitable German companies have their headquarters in NRW.

Thanks to the Ruhr metropolis and South Westphalia, the state is home to the strongest industrial regions in Europe.

NRW’s industry accounts for more than 27 per cent of the state’s gross value added.

Moreover, the industry in NRW accounts for more than 18.5% of the gross value added in Germany.

One in four German world market leaders comes from NRW.

These include not only large, world-famous industrial companies, but also dozens of smaller hidden champions from all sectors of the economy who are leaders in their fields.

More than 710 000 small and medium-sized enterprises are the economic backbone of the state of NRW.

Many of these companies are attractive cooperation partners for international investors in the development of products and production processes, in services or in research.

The economy of North Rhine-Westphalia is also successful in the immediate vicinity of industry.

Nowhere else in Germany do business-related service providers such as consultancies, IT or R&D services, recruitment agencies and so on make such a significant contribution to innovation and value creation as in NRW.

The economy of NRW has close trade relations with the whole world.

The state’s total trade volume amounts to no less than EUR 439 billion on an annual basis. No other German state can match this.

Just under 15 per cent of all German exports are produced in NRW.

And of all German imports, as much as 22 per cent are destined for NRW, Germany’s most populous state.

NRW is also an attractive location for retail groups.

No fewer than 13 of the 40 highest-earning retail companies in Germany are located here, including well-known names such as Aldi, C&A, Deichmann, Metro, Rewe, Galeria Karstadt-Kaufhof and Tengelmann.

North Rhine-Westphalia is blessed with a fantastic transport infrastructure.

This German state is Germany’s number one in terms of logistics and transport.

In almost no other region in Europe can (logistics) companies find better conditions for transport and logistics.

Some of NRW’s strengths at a glance:

NRW is equipped with a very well connected network of roads.

Specifically, more than 2,200 kilometres of motorways were built in NRW.

In addition, there are some 18 000 kilometres of ordinary roads (a combination of federal and state roads).

The road network of North Rhine-Westphalia is also well connected to the European motorway network.

Specifically, there are no fewer than six airports in NRW from which you can fly to the whole world!

The two largest and best-known airports in North Rhine-Westphalia are Düsseldorf Airport and Cologne Bonn Airport.

NRW is in a very interesting location in terms of waterborne freight transport.

The territory of NRW is blessed by Mother Nature with more than 700 kilometres of waterways, which connect NRW with the largest European seaports.

NRW has the largest inland port in the world, Duisburg to be precise.

North Rhine-Westphalia is the most important inland port location in Germany.

There are no fewer than 120 ports in NRW, with a freight handling volume of just under 120 million tonnes a year.

In North Rhine-Westphalia you will find the best railway network in the whole of Germany.

In terms of both goods and freight traffic, this state is equipped with the best railway network in Germany.

There are more than 6 000 kilometres of tracks in NRW and it is also an important hub in the international high-speed rail network.

An example of this is Cologne in the territory of NRW. In Cologne you will find one of the most important railway hubs in Europe.

It connects China (Chongqing) with Germany (Duisburg) across the country.

The state of NRW has an enormous amount of knowledge and experience in logistics services.

For example, the World Bank has repeatedly crowned Germany the best logistics player in the world.

Naturally, it is the state of North Rhine-Westphalia that plays a crucial role in this.

Almost 25 000 companies are active in the logistics sector. Together, they provide almost 375 000 jobs and an annual turnover of almost EUR 70 billion.

The central location, excellent infrastructure and large market volume in and around NRW attract many international investors.

Of the top 25 largest logistics companies in Germany, nine have their headquarters in NRW.

Interesting fact: Around 25% of all logistics centres in Germany are in NRW.

Some examples are the distribution centres of global players such as Amazon, Esprit, TKMaxx and Zalando.

It is the centre for renowned foreign companies serving the German and European markets.

NRW has been becoming more attractive to foreign investors for years.

More than 20 000 foreign companies from the most important investor countries control their German or European activities from NRW.

This amounts to one fifth of all multinational companies in Germany.

Foreign companies have developed into a major employer in the state and employ about one million people.

North Rhine-Westphalia is international and diverse

Besides the many convincing economic and infrastructure-related arguments in favour of North Rhine-Westphalia, NRW stands out for its international atmosphere and hospitality.

Cultural diversity is a characteristic feature of NRW.

These favourable conditions make foreign investors feel at home in NRW, both culturally and economically.

What is the capital gains potential of investment property in NRW?

Nobody has a crystal ball to make predictions.

That said, historical value increases of +/- 5% per year can be noted in certain areas of North Rhine-Westphalia.

Of course, the past is no guarantee for the future.

But in view of NRW’s economic growth, you can safely speak of attractive opportunities in terms of capital gains potential.

Why invest in North Rhine-Westphalia?

As Germany’s leading business location, the state of North Rhine-Westphalia is in great demand among foreign investors worldwide.

It is also home to many companies with global growth potential.

NRW is Germany’s number one investment location and the location for companies and entrepreneurs with global growth plans.

Where are the best places in NRW to invest in real estate?

Always try to opt for residential property in B and C cities.

There you will find the best value for money and the highest upward potential for value growth.

Are you hesitating about buying a second home as an investment? Regarding the destination and location?

Then don’t hesitate and get some more inspiration from the offers at the bottom of this page.

How to manage and let investment properties in NRW?

Do you live abroad?

Then being your own landlord [AVAILABLE SOON] may not be the best option for German investment property in NRW.

Fortunately, you also have the option of passively investing in rental property.

Specifically, you can, for example, appoint a rental agent to take care of everything for you.

Or you can go a step further and choose a premium package and guidance.

In practice, this means that you, as the owner, can fall back on a contractually stipulated rental guarantee. (See the offers below for some options).

In other words, you are sure to receive your monthly rental income. The developer is in charge of management, maintenance, collection of funds and so on.

Who can help find suitable investment properties in North Rhine-Westphalia?

Try to deal with a reliable party that does not sell German junk property.

Focus on quality and a worry-free management package (check the offers below for some worry-free investment formulas in German rental property).

Can I borrow in Germany to buy investment property?

Do you live and work abroad? Then you probably think that you will have to look abroad for real estate finance to complete the purchase of German property.

But that is a mistake… You can also take out a loan in Germany if you are going to invest in sustainable and high-quality real estate.

There are several banks willing to establish a mortgage on German investment property, thus enabling you to borrow in Germany.

Interest rates and maturities are in line with the market and competitive.

What return can I expect from a buy-to-let property in North Rhine-Westphalia?

The return on investment of real estate [AVAILABLE SOON] depends on various factors.

To get a better idea of what kind of return you can expect, take a look at the range of investment properties in Germany .

Tip: If you finance partly with a loan, you can maximise the return on your equity thanks to the financial leverage effect.

When is the best time to invest in North Rhine-Westphalia?

North Rhine-Westphalia is in full bloom and growth. Now is the time to invest.

There is no point in hesitating or doubting. Do you have savings in the bank that yield almost nothing?

And are you aware that this money is losing value every year due to the unprecedented rate at which money is printed?

Then a German real estate investment can be an interesting option for protecting your assets and making them profitable.

A good investment horizon is different for everyone.

But generally speaking, an investment horizon of 10 years is a good guideline for investing in German rental property.

You have to let time do the work in terms of value growth in order to generate significant added value.

In North Rhine-Westphalia, private investors can expect a unique combination of high rental yields and high potential gains from a future sale.

Other interesting information about Germany