Woluwe-Saint-Lambert as A location for investment property: Advantages 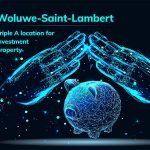 Woluwe-Saint-Lambert is a fantastic residential commune in Brussels where it is easy to live.

It is therefore interesting for individuals to invest in certain residential properties to let.

This green commune on the outskirts of the city can safely be considered an absolute A location in Brussels.

Discover below the most important information and facts about Woluwe-Saint-Lambert and get inspired!

Woluwe-Saint-Lambert is a Brussels commune with a green character, crossed by the famous Boulevard de la Woluwe.

This Boulevard de la Woluwe crosses the municipality from north to south and runs along the Woluwe River, which is a tributary of the Senne.

Woluwe-Saint-Lambert is known for its valley and the various green public spaces for its inhabitants.

There is also open-air infrastructure for the residents, which makes outdoor sports easy to do.

In this green valley there is also a section of the well-known Green Walk (in place of the old railway line).

Home to businesses, hospital and university

Along Woluwelaan there are numerous industrial buildings that provide considerable employment.

There are also several supermarkets, as well as the large Woluwe Shopping Centre.

In the eastern part of Woluwe-Saint-Lambert, there are several university buildings and the well-known Saint-Luc University Hospital of the Catholic University of Louvain.

The Faculty of Medicine and some colleges are also located there.

There is also a large sports complex that is geographically adjacent to Woluwe-Saint-Pierre.

Municipality with balance between nature and buildings

The territory of Woluwe-Saint-Lambert is divided into two unequal parts by the Woluwe valley.

In this green valley runs the Boulevard de la Woluwe and the Woluwe River. In the vicinity of the river, one can still find numerous remnants of the past.

Thanks to its fertile agricultural land and good, rich subsoil, Woluwe-Saint-Lambert has in the past grown into a rural municipality with numerous farms and fermettes.

For those in the know: Woluwe-Saint-Lambert is blessed with loamy soils (on slopes and plateaus) that are suitable for growing cereals.

In addition, there were several wetlands in the eastern part of the municipality that stimulated the development of the Woluwe Valley.

The urbanisation process that is so typical for areas in and around Brussels, started late in Woluwe-Saint-Lambert.

Indeed, it was only at the end of the 19th century that a number of streets in the pattern of a checkerboard were laid out in the western part of the municipality.

From there, urbanisation continued towards the Tomberg district.

Originally, Woluwe-Saint-Lambert was a municipality with a lot of agricultural land, which gradually gave way to built-up areas.

Nevertheless, Woluwe-Saint-Lambert has managed to maintain a good balance between housing facilities for the growing population on the one hand, and green nature zones on the other.

This municipality is attractive for the thousands of expatriates who work in Brussels.

Thanks to various green areas such as parks with ponds, grassy areas and farmland, an interesting balance has been created between living spaces on the one hand and areas of cultural, natural and historical importance on the other.

Woluwe-Saint-Lambert is a municipality with excellent mobility facilities.

This municipality is particularly well covered by public transport through a bus, tram and metro network.

Consequently, it is a magnet for people with a job in or around Brussels.

Thanks to the good connections, one can quickly commute to and from work with Woluwe-Saint-Lambert as the base.

Facts about public transport in Woluwe-Saint-Lambert:

As far as traffic jams on the roads are concerned, Woluwe-Saint-Lambert is spared the worst.

But during peak hours, there are certainly traffic jams on the access roads to the E40 (such as on Woluwelaan, Marcel Thirylaan, etc.).

Woluwe-Saint-Lambert for a real estate investment: Offer in the spotlight

Are you interested in investing in residential buy-to-let property in Woluwe-Saint-Lambert?

And would you prefer to hire a professional steward to take care of the rental, management and maintenance of the investment property?

Then the following investment opportunity in Woluwe-Saint-Lambert will probably appeal to you.

Click on the following link to view all details: Investment property in Brussels for sale with a carefree rental formula for passive investors in an absolutely prime location.

The excellent location of this real estate project and the high-quality finish of the residential units ensure that you, as a retail investor, can rest easy!

The steward will be able to maximise your occupancy rate and your rental return without any problems!

Advantages of real estate in Brussels as an investment

In general, the demand for quality residential units for rent and for sale is greater than the supply.

This explains why property prices in Brussels are stable and rising. This also applies to rents.

These factors therefore make a green residential commune in the Brussels periphery such as Woluwe-Saint-Lambert an attractive investment location.

Part of the rental market is made up of expats with a well-paid job in Brussels.

They are attracted to green municipalities such as Woluwe-Saint-Lambert, which also guarantee good connections to the city centre and Brussels Airport.

Investing in Belgium, and specifically in Woluwe-Saint-Lambert with a strong tenant base, can therefore be financially rewarding!

In recent years, the real estate market of Woluwe-Saint-Lambert has seen an increase of foreign tenants.

They are expats who come to settle in this relaxing green suburb because they are developing their professional careers in Brussels.

They rent high-quality residential property in places like Woluwe-Saint-Lambert because it is nice, safe and comfortable to live there.

Given the licensing problems in Brussels and by extension in Woluwe-Saint-Lambert, there is a scarcity on the real estate market.

There is more demand than supply for the niche segment of premium flats with one, two or three bedrooms.

For retail investors who are looking for a profitable but stable-value investment, this obviously offers opportunities.

Fact: Thanks in part to the local market conditions described above, the local property market has shifted up a gear.

This means that there has been intense cooperation between promoters, construction companies, rental agents, stewards, insurers, syndicates and so on.

As a retail investor, you can therefore quite easily call on a local expert to maintain and rent out your buy-to-let property.

Some facts and figures about Woluwe-Saint-Lambert

Here are a few more interesting facts about this investment location par excellence!